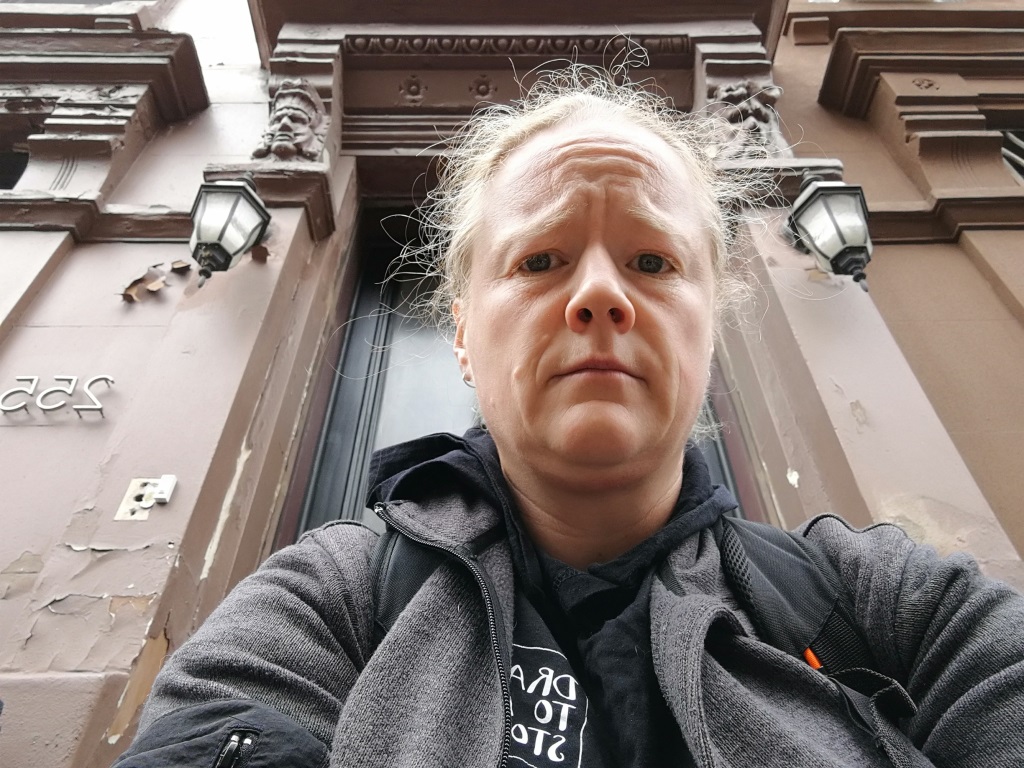 That’s not something you want to discover about yourself.
Racists are those people that I Ioathe. The ‘less than’ people I see on the news being arrested for hate crimes.
The people I disassociate myself from because….

I’m well-travelled.
I’m educated.
I’m cultured.
I have friends with different coloured skin.
You need to know that as I write this, that my whole body is creasing up in discomfort.
It’s the pain of realising that I’m no different to the ‘less thans’ and I’m trying to not feel ashamed.

I want to run. Badly.

Every cell in my body is fighting this admission. I hate it.
And now I’m crying. I feel like I’ve hurt my dear friends who have different coloured skin to me and I hate that even more. They don’t even know that I’m racist… but I feel like crap for actually being secretly pleased that I’ve been able to hide.

Last October I spent a week in Harlem, New York.
It was incredible and it was hard. Boy was it hard. It’s taken some time to process and has led to me sitting here, writing to you.

My wife is an Archbishop and her denomination’s Synod was being held at their church in Harlem.
I went along for the ride. I think my exact words were, “you’re not going to New York without me!”. It was my dream city and I’d never been before. For ease of access to the church, we stayed in Harlem.

And then it began. Five days of realising I’m racist.

So how does that happen?

His words were, “with all due respect, please do not compare your sexuality with one’s race. It is two totally different things.” I was affronted at his assumption that I was like ‘the others’.
I got it. Really I did!  I didn’t.
I’ll just reframe my point because he’s just misunderstood me. He hadn’t.

De-Dee Loft Davis is a racial equity consultant I follow on Linkedin. She’s great. About 2 months before New York I’d commented on a post of hers (how WOKE of me eh?) to show support that I understood the micro-aggressions Black people experience, because I get them too as a gay person.

It started a conversation between me and another racial equity consultant – a guy who continued to say, For me, most can hide their sexuality. I cannot hide my Blackness. It is what you see. I understand what you are trying to say by, “Sit in my shoes,” but I really don’t like when people try and compare the two. Both identities should be able to stand on their own.

I still didn’t like it. I really wanted him to understand my position. He wasn’t listening. (I know…..) He didn’t understand my gayness. I continued my argument, reframing and adding more points from my angle. This would make him understand (Don’t say it. I know…).

Suddenly I stopped.
I don’t know why, but I remembered something that Catrice M Jackson had said in her book ‘Antagonist, Advocates and Allies: The Wake Up Call Guide for White Women Who Want to Become Allies with Black Women’.  See I knew I wasn’t racist; I was reading the right books.

Essentially one of Catrice’s messages is simply to shut up and listen.
LISTEN to Black voices.
LISTEN to their experiences.
LISTEN to what they are telling you.
TRULY LISTEN.

So I listened and then I apologised to him. I did come to understand his point.
However, I still managed to tell myself that this was a one off experiences of me misunderstanding.

A FALSE SENSE OF SECURITY

Fast forward a couple of months to Harlem – grab a coffee and walk to the station to head Downtown. Ironically I was on route to give a talk to Families in Global Transition Tri state affiliate about identity, belonging and the biases we hold.

I’m feeling confident as I walk. Slightly excited at being here. Yeah I’m in Harlem. I’ve always wanted to come here. I’m an ally. I want to show support.

My naivety hit me hard. I smiled at people. Nobody gave a crap.
In fact it felt the opposite. It felt hostile.

And there were two hostilities, but I realised that they were both inside of me.

The first? I was desperately uncomfortable and trying to not look privileged. I couldn’t hide it. I’m a white woman walking down a street called Malcolm X Boulevard. That’s enough.

And second, (now I’m really trusting you with this), it became apparent to me how different my body felt when I walked past Black men. It hesitated and it felt anxious.

I tried to tell myself that it was because I’m a woman and we’re good at keeping ourselves safe in public, but deep down I knew I wouldn’t have felt it so acutely if they were White men.
I was ashamed and felt awful. I even found myself blaming them for making me feel this way. Nothing like a bit of projection eh? But I did want to understand why my body spoke to me this way.

I’m still wrestling with the why, but what I can offer for now is:

YOU’RE JUDGED FOR BEING WHITE

I was completely ignored as I walked around Harlem. No one smiled at me. No one said anything to me. No one made eye contact of any description. But if you’re White and thinking that’s normal for any city street, watch what happens when you’re next out and about where you live. You receive subtle acknowledgements all the time. A sorry when someone squeezes past you, a quick stare if you’ve got a slogan on your shirt, people stay on the footpath when you walk towards them or they might give you a smile.

In shops, the cashier talked to me as in, ‘that’ll be $5.99 thanks’, but if I said anything else it was completely ignored.

And why should I be? Centuries of slavery, discrimination and aggressions towards Black people and I think I can be welcomed as I venture into their safe spaces? Their communities? The reality was starting to hit me.

The reality hit even harder when I walked down the street with my wife dressed in her clericals. Her Bishop’s collar received welcomed smiles, greetings, Hello Padre – yes, padre! 🙂 In the laundromat where we’d been met with disdain in the morning, we were now offered a staff machine and all the help we needed.

Previously, being White was enough to be judged. I hated what my skin represented. I wanted them to know I was different to ‘other white people’, but it didn’t matter. It was irrelevant. I was now experiencing what it was like to be judged for the colour of my skin.
It’s shit by the way.

Having struggled enormously when my wife became a priest (suffice to say, I didn’t like religion much), the irony of her giving me warm passage through the streets of Harlem was not lost on me.

You see, one less barrier existed. One less potential agitation removed. The collar bridged our differences and mutual fears.

I found myself wanting to leave Harlem, because I felt uncomfortable. I wanted to go back to blending. And then it hit me again. Blending is not an option for Black people. Unless they’re in Harlem. And then there’s this stupid White woman walking down the street…..

That’s gonna piss anyone off.
Privilege.

And you know the really awful thing? When I was in Harlem, I wished I had black skin, so I could blend and then I thought about what that really meant outside of Harlem and I didn’t want it.
Not because I think being Black is in anyway ‘less than’, but because I wanted to be accepted and not judged.
Privilege.

One of the fun things about New York is all the snippets of conversations you overhear when people walk past talking on their phone.

On this occasion I wish I’d heard differently.
A group of guys sitting on the front steps of a house.
Yeah, he’s dead. They said, ‘Stop! Freeze!’ then shot him. He’s dead.

This wasn’t a TV cop show or a social media post that you can distance yourself from.
The reality of their faces said everything.

I was now starting to truly listen. Minute snippets of truth slowly sinking into my tiny brain.

A couple of days later, Atatiana Jefferson was shot in her own home through her bedroom window by a Fort Worth police officer responding to a report that her front door was open. Moments before, she had been playing video games with her nephew, heard a noise and went to the window.

Black people are subject to deadly force even when they stay home.
I have never worried for my life when the police come to my home or when they’ve pulled me over in my vehicle. Privilege.

It became time to move to another hotel Downtown. Synod was over.
I was relieved to be leaving the tension of Harlem.

This relief was also distinctly uncomfortable, because I knew that I could simply walk away from the discomfort I’d felt. It was an easy option for me. I could return to privilege without any effort and if I wanted to, forget about my experience ‘north of Central Park’. I could slip back into the melting pot of New York’s diversity and everything would all be okay again.

What is not okay is not doing anything about it.

A switch has been turned on and I can’t turn it off.
I don’t want to.

The challenge for me personally is to work out what I’m going to do about it.

It starts with this blog.

In reading Catrice Jackson’s book, I had hoped to be classified as an ‘Advocate’ with the aim of moving to ‘Ally’.

However, my well intentioned, but misguided comment on Linkedin puts me in the Antagonist camp. I am not proud of this. But I’m also not afraid of difficult conversations.

So for me, it’s back to Catrice’s book to learn how to move forward into ‘Advocate’ and ‘Ally’. It’s too important not to.

Who’s with me?
It’s going to take more than one coffee to work through this one.